A second race in spring flood took place on my favorite river. There’s always something weird going on when I go near Connecticut. During a race near Northampton, Amherst College disappeared in a fog bank. It was their home class. What if they knew about a counter-current that we didn’t know existed?

But Mouse guided us very well to the finish line and when Amherst emerged from the fog, the margin was the curvature of the earth.

Reader, if you think I am telling this story to humiliate poor Amherst, you are mistaken. There’s a reason for saying that that will become apparent my senior year.

But my family had its own relationship with the Connecticut River. First my older sister had her piano smashing party at Hegamumpus/Higganum, then another at the same location for the Ledyard Canoe Club.

John Ledyard was a failed Dartmouth student, world-renowned dreamer and explorer who took part in Captain Cooke’s third voyage. Everything about him is a legend, with not particularly important facts. Ledyard is where Harvard and Yale have their supernumerary boathouses, but why wasn’t a town in Connecticut named after this man?

Well, Ledyard was born in November 1751 in Groton, Connecticut – the argument for a township on the Thames (rhymes with frames). When Ledyard attended Dartmouth College, he was just three years old. He left it for two months without permission, much like when Peter Amram drove his car into a Brown Quadrangle or when Bill Stowe stole his Christmas crib. John led a mid-winter camping expedition and eventually left Dartmouth altogether.

His world plans, including one involving skins, have mostly failed. His business deals supposedly involved Thomas Jefferson, John Paul Jones, the Adams family, and other prominent historical figures. He may have been the first American to set foot on the left coast and in Hawaii. He may have traveled more than Richard Halliburton or Marco Polo.

He was hiking through Siberia when Catherine the Great had him arrested and deported to Poland – the resemblance to the name Polo? In Egypt, he drank sulfuric acid by mistake and died at the age of thirty-seven.

However, my favorite story about him is that while he was in Hanover he wanted to see his grandfather two future states downriver in Hartford and built himself a canoe. He was paddling when he had to but preferred to let the current carry him south and was lying on his back reading Ovid when he realized his boat was about to plunge into the forty-foot drop. of Bellows Falls. In his panic he capsized and lost his provisions but managed to reach the shore.

Each year the Ledyard Canoe Club at Dartmouth College paddles the river. Usually they start in Hannover. One year they started at Connecticut’s Fourth Lake in Canada and covered the four hundred and ten miles – usually though they start at Hanover halfway like Ledyard itself.

My sisters, one older and one younger, always gave them a closing party. This happened both at Hegamumpus (now known as Higganum) and at Fenwick, Old Saybrook, as we neared the last eighteen miles of Long Island Sound. Life Magazine did a feature on the Ledyard Canoe Club and my sisters.

Mouse’s father, horrified that his son was driving a spear-like thing, gave the crew an old pickup truck with a heavy wooden superstructure, an upgrade that continued to rock ominously.

Arriving north of Hanover, we started unpacking the Stein and Brown crew oars.

A Dartmouth crew member who beat us the year before asked, “How come your oars aren’t painted?” Nobody answered. The secret answer was long practices that wore the paint.

Salt water in the US northeast remained open for much of the year. And Connecticut, in spring freshet, was just sending up an assortment of pack ice. The one that hit my 4 oars during the actual race was exactly the same size as the one that washed up on the shore from which I used to practice my slap shot at Higganum/Hegamumpus.

I was alone at home and did not go to school due to infectious mononucleosis. My target for slap shots was a card table on the edge of the floor. My shoes were slipping on the ice as the pack ice dislodged and drifted towards the shipping channel.

I jumped to shore but couldn’t. The water was hot and sparkling. I splashed on the bank. Result: pneumonia.

We skipped Dartmouth at the start and then overshot and won by two lengths setting a speed record that will never be broken. And had a similar start in the Dad Vail to wrap up our regular season.

Everything in Philadelphia conspired for us. As the seeded Dad Vail, we were allowed to throw closer to the start line than the other crews – maybe not quite right, but we’d take it.

“Are you ready,” yelled the amplified voice of the referee. “Get ready. Row.”

I remember hitting a partial hit as hard as I could and then the full hit that followed as well and thinking, “Hey, that’s not so bad. Let’s try again.” etc The way Whitey indoctrinated us was to hit the hook and go full throttle all the time, no matter how far we were about to row.

In reality nobody does that. Twenty power hits to start, five ordinary hits to settle down and god help you if you don’t “settle” which is another word for chill. Fail to settle and you’re left in panicked hell the whole way through.

No, we didn’t go as high as usual initially – about 40 strokes per minute, then a 33 or 34, slower than most other boats.

St. Joseph’s College in Philadelphia was second but a distant second. And I kept sending myself the simple message. “Another blow. Again.”

The thing about a fast, powerful hit is that it gives more time for hang gliding with the blades out of the water going through the air.

The boat had great rhythm and swing. “If I feel this good, everyone else must too.”

The margin of victory, to use Bill Engeman’s phrase, was “the curvature of the earth”. 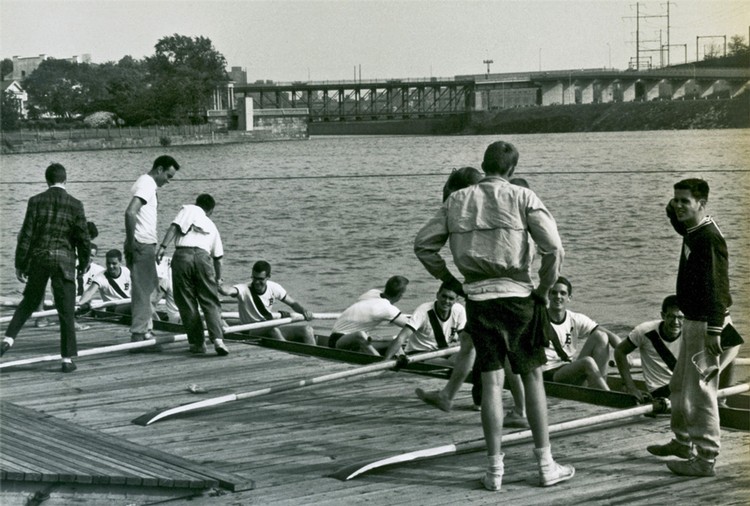