Do you remember the movie “Field of Dreams” with Kevin Costner and James Earl Jones? A farmer in Iowa is summoned by voices from the Great Beyond to build a baseball stadium in his cornfield. One of the most iconic lines that is now part of our popular culture is “If you build it, they will come”.

In the case of The Factory on Willow, the saying would be: ‘If you restore it they will come’ and will inspire other investors to do the same with other properties in Manchester’s South End.

When Elizabeth “Liz” Hitchcock decided to buy the former Cohas shoe factory at 252 Willow St. in 2019, she came up with a concept that they knew would pay big dividends. His plan was to restore the 90,000 square foot factory into a mixed-use development where artists and gig professionals could live, work and enjoy all that Manchester city center has to offer while preserving the rich history of the mill which was built in 1904.

Preston Hunter, vice president of Eckman Construction Co. in Bedford and general contractor for the project, explained that the end result is a four-story complex that includes 61 studio apartments, retail space, a food truck lot and 16 units. Airbnb to accommodate nurses and visitors. high-tech workers. The Artist-in-Residence program also allows artists of all types to live and do special projects at The Factory on Willow. 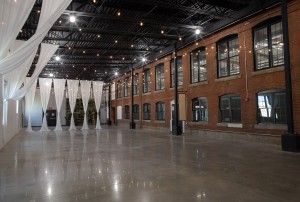 Hunter said the space also includes commercial uses that could eventually include a craft distillery, beer garden and offices. Loon Chocolate and 603 Charcuterie have already established thriving retail businesses here, and a large event space is available for rent.

“There are many opportunities for different uses,” Hunter said.

In addition to the food truck patio, Hunter said an amphitheater is planned where live performances will be held.

“We are in the process of creating an on-site distillery,” Hunter said, adding that it would be a stand-alone building that would include a tasting room.

“We have created, in addition to the food truck terrace, a space for residents who would like to have raised beds and grow vegetable gardens and other plantations.

Along with the amphitheater and additional landscaping that will take place throughout The Factory on Willow property, Hitchcock recently said it is banking on two transport projects to spur growth in the South End and fuel greater success. for The Factory on Willow. The first includes a $25 million federal RAISE grant that will be used to create a new roadway with a bridge and pedestrian bike access near the intersection of South Willow St. and Queen City Ave. as well as a pedestrian bridge over Granite Street. The second is the completion of the South Manchester Rail Trail which runs directly behind The Factory on Willow. The rail trail is part of a much larger network that will eventually stretch from Goffstown to the Seacoast. When completed, both projects will provide better access to the South End. 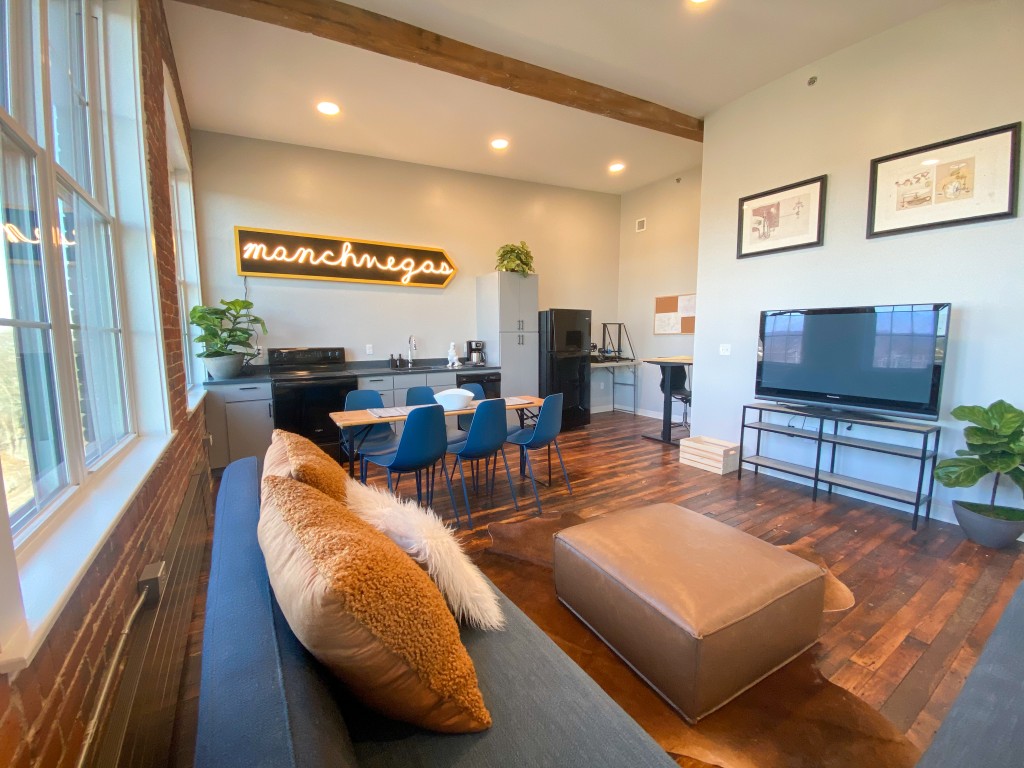 Hunter said Hitchcock’s vision was to create a living space where art would be promoted and celebrated as well as integrated into the surrounding community.

Hitchcock also selected items to feature in the building to display its rich history, including the original timber and glass doors, cast iron boiler arch doors and a timber beam that was converted into a bench in the hall.

Adam Wagner, owner of Market Square Architects in Portsmouth, was instrumental in helping Hitchcock transform his vision into a dynamic design that incorporates the factory’s rustic red brick walls and timber frames into the open-air studios of the building. The Orbit Group with guest designers created the Airbnb furnished units to appeal to the target demographic of artists and gig economy workers.

“What is unique about this project is that residents are looking for more than just cookie-cutter apartments. They want to be part of a community,” Hunter said. “It’s designed to be a true live working studio experience.”

Combining millennial-style live-work experience with the history of the former McElwain shoe factory, Hunter believes Hitchcock succeeded with all of his goals.

Hunter’s family also has a direct connection to the historic past of the mill.

“My mother-in-law worked in the shoe factory when she was a teenager,” he said.

The two-year project that began in 2019 was completed in March 2021 when the first residents moved into the building, Hunter said.

This was all happening during the Covid-19 pandemic. “We were able to keep the yard going through the pandemic,” Hunter explained.

Hunted said the process of transforming the once-abandoned factory into its current use was a challenge. “It is important to remember that this building was a collection of additions that had been added to the original factory building over the decades as the use changed and it had a lot of complications and challenges from a design perspective,” he said. 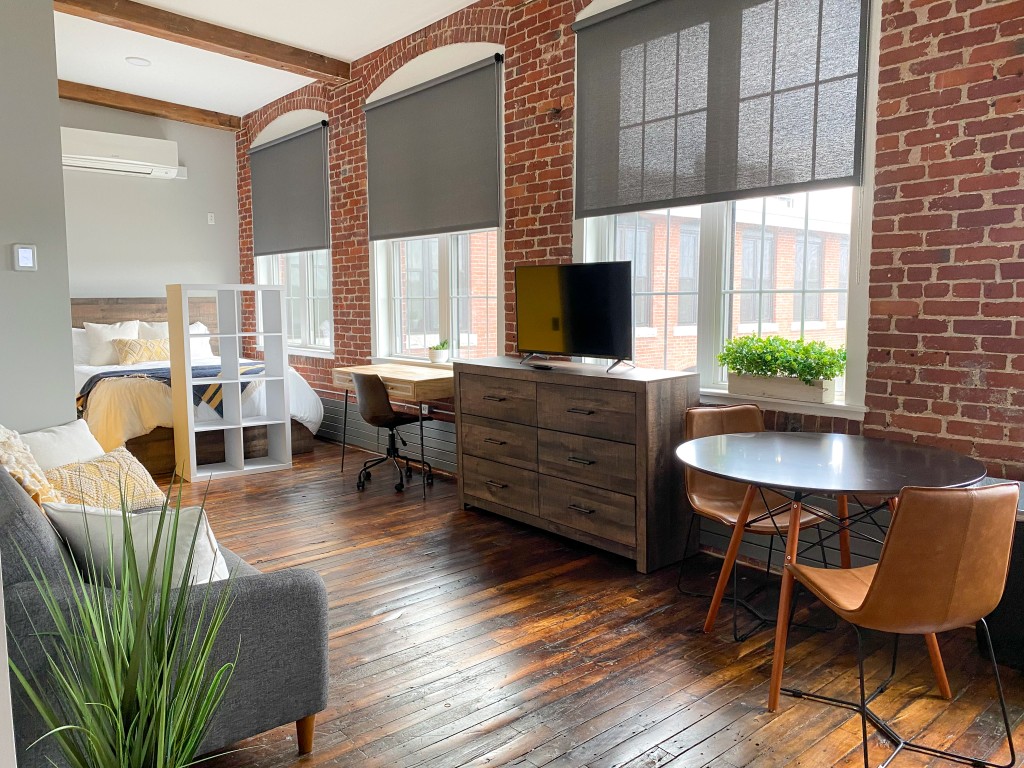 They partnered with Market Square Architects to address these challenges. TF Moran, Bedford’s structural engineer, played a key role in helping them assess the building’s structure and additions, Hunter said.

“We determined as a team that some of the more recent additions were functionally obsolete. We ended up demolishing parts of the building that weren’t part of the original mill building that was built in 1904,” Hunter said.

“We brought the building back to its original form. This allowed us to keep the best in the building and remove the parts that did not add value. We also exposed parts of the building that hadn’t seen daylight for a very long time,” Hunter explained.
He noted that the project included a lot of masonry restoration. He said there is a tower which was part of the original mill complex which has been restored. There was also a lot of contractor masonry both outside and inside the building.

He said the building also had a wooden frame that showed its age. “The structural engineer assessed every beam and every column after we opened and exposed everything to identify which ones needed to be supported.”
Like many factory restoration projects, this one also required its share of environmental remediation.

“The building also contained asbestos and lead paint, which had somehow been buried under several layers of flooring. We had to remove all hazardous materials and everything was disposed of to create a clean environment, so we could basically start with a clean slate,” Hunter said.

Hunter said the site also housed a former underground oil storage tank that broke down 50 years ago. The tank was leaking heating oil and it was a site managed by the state Department of Environmental Protection. In most cases, developers can leave it alone and cover it up. But Hitchcock decided it was best to remove the contaminated soil and clean the site with fresh dirt. The building and site were then completely cleaned and restored to their original condition.

“The team really put in the time and effort to understand as much of the unique idiosyncrasies of the building as possible before starting construction. The building has really great bones, and the design goal was to really showcase the qualities existing ones as much as possible,” Hunter said. 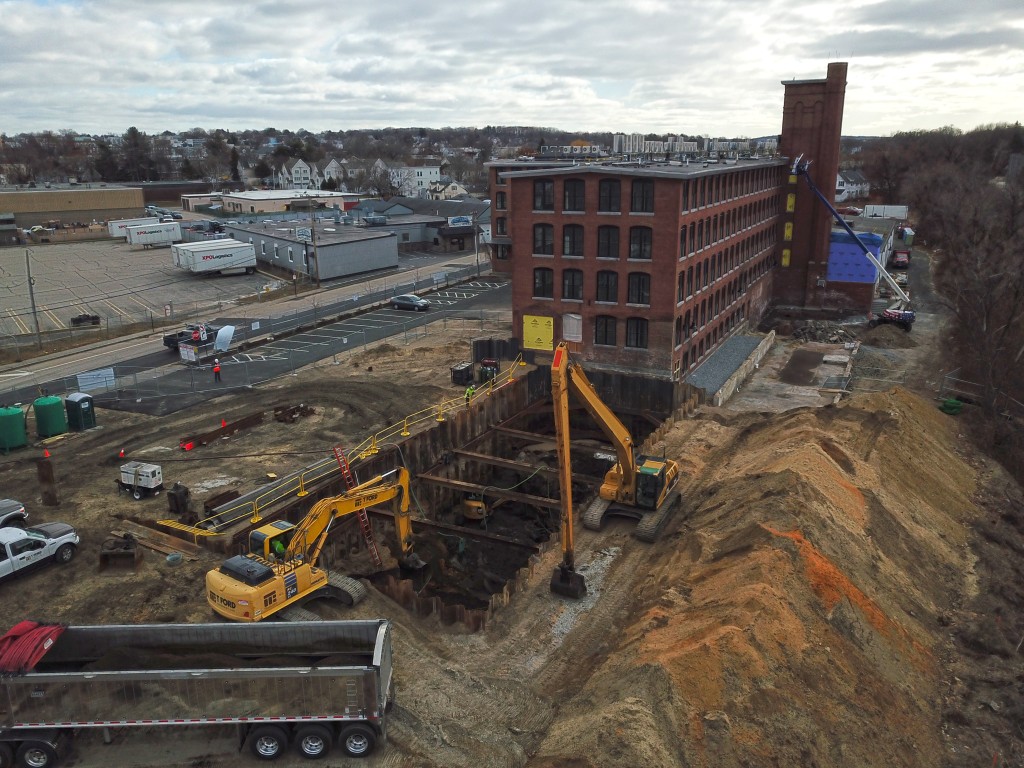 Some of the other improvements included two new stairwells to accommodate new egress requirements for apartments at both ends of the building from floor to floor. The building was also designed to provide fresh air to every apartment and common area in the building. New windows have been installed throughout the building with beautiful black frames that are historically accurate and provide great natural light throughout.

“It’s also an investment in the southern part of the city. There has been a lot of redevelopment in the Millyard, the North End and the city centre. This project is the first to recognize that there is great opportunity in Manchester’s South End. It has created a bit of a destination for itself by having all these amenities. It will also create an opportunity for development in this part of town as the need for housing continues to grow,” Hunter said.

The team’s collective efforts to create a new crown jewel in Manchester were also recognized by Plan NH, who presented the project with an Award of Merit in June.