By: Robert Belle*Photography by: Greg Bush

NOTICE: If you are from another state operating in NSW, TfNSW will still keep tabs on your demerit points

I recently spent some time flying around the country and reading a bit. Being the sad pup that I am, I threw a few textbooks in my bag while I was packing. Luckily, one of those textbooks was on constitutional law. Reading it made me think of a few things we come across here at Highway Advocates. Things that don’t seem right at all.

Victoria gets Guernsey first. In our view, its traffic and law enforcement camera system is problematic. They are totally outsourced to multinational companies, with camera footage that can be edited with basic software. Victoria Police are orchestrating the whole process. This alone is worth mentioning.

Sentencing laws in Victoria are also self-contained. An outright dismissal under section 76 means that a court, if satisfied that a person is guilty of an offence, may (without recording a conviction) dismiss the charge. In Victoria, unlike other states, if you receive an absolute discharge or dismissal after pleading guilty, you will continue to pay the points or the suspension. With certain fatigue and vehicle defect related offenses resulting in demerit points in the Heavy Vehicle State Act (HVNL), one would think that sentencing would have some uniformity across states. Only in Victoria can you escape conviction and still be punished.

Victoria gets a tick elsewhere, however. B-doubles in Victoria can operate at higher mass limit weights (HMLs) on most routes. The only criteria is that you must be eligible for the concessional mass.

However, going up the east coast in New South Wales and Queensland is an entirely new ballgame. They require operators to have permits and expensive software, and travel is restricted to certain routes. Yet, if you are the victim of a mass crime, you are prosecuted under “national” regulations. What would MM. Quick and Garren, the writers of our constitution?

RELATED ARTICLE: Inconsistent state laws are a bogeyman for truckers

The periods of suspension for professional drivers in New South Wales are:

In Victoria, Queensland, South Australia and Western Australia, for 12 or more points you walk or walk the gold point path. Get out of that golden path and you get suspension usually double what you would have gotten originally. 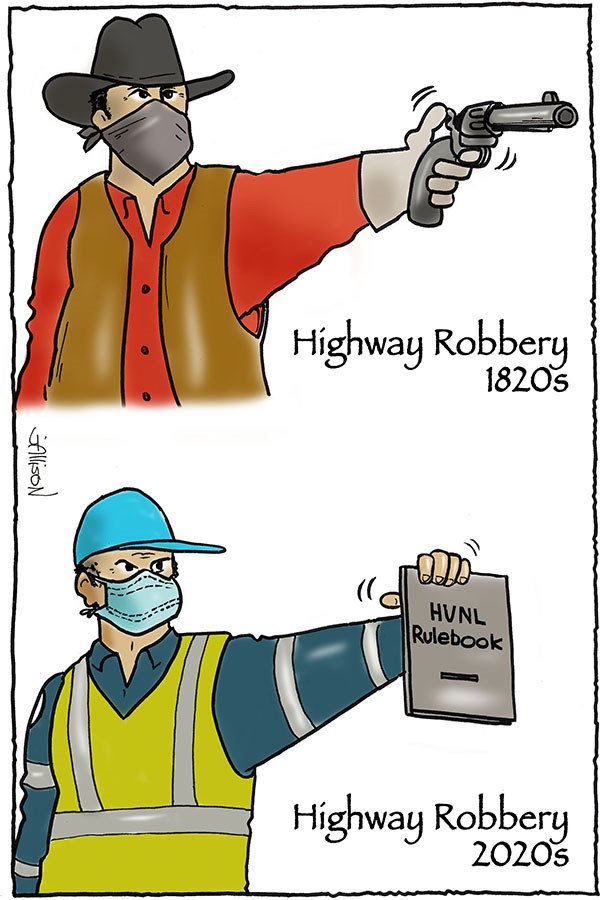 This is where it gets interesting. If you are a professional driver from another state operating in or through NSW, Transport For NSW (TfNSW) will always keep tabs on your demerit points. If you reach 13 points in NSW you will receive a letter (possibly) stating that you cannot drive in NSW for a specified period. Still, your NSW licensed cobber can continue with their extra point.

Drivers in the ACT and Northern Territory can magically avoid being demerited for offenses they commit elsewhere. And it can also happen to drivers from other states, especially if they commit their crimes in the territories. What makes federal territories so unique?

All this and more. Remember that the Australian Rules of the Road Agreement was devised in 1999 to ensure national uniformity. It was assumed that various demerit point systems would follow. The National Heavy Vehicles Act had a similar purpose when it was discussed at the Council of Australian Governments. The National Transportation Commission (NTC) puts it this way:

“The HVNL is the result of a collaborative process led by the NTC. It involved industry and government to develop a nationally consistent approach to heavy vehicle legislation and regulation based on model laws developed by the NTC.”

Are we all feeling this nationally consistent love? With the NHVR taking over enforcement duties in New South Wales in August and (perhaps) Queensland next year, we should start to see a more consistent approach. Or will it just be a case of Coke or Pepsi – different colored shirts but the same stuff inside?

At Highway Advocates, we operate in all jurisdictions and apply a consistent national approach. We must navigate a myriad of complex statutory provisions and ever-changing practice notes and legal procedures. We are the link between your world and the world of law.

Sign up to receive the Owner Driver e-newsletter, digital magazine and other offers we choose to share with you straight to your inbox